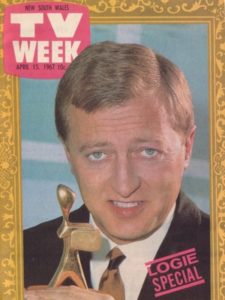 Graham Kennedy collected his second Gold Logie at the ninth annual TV Week Logie Awards. The Gold Logie that year also carried the title Star Of The Decade, in recognition of Kennedy’s 10 years’ success in Australian TV. Kennedy also won the Logie Award for Best Male Personality in Victoria for the sixth year running. For …

END_OF_DOCUMENT_TOKEN_TO_BE_REPLACED

Permanent link to this article: https://televisionau.com/2017/04/tv-week-logie-awards-50-years-ago-7.html

The Mildura district in north west Victoria was the last in the state to receive television. Like most other regional areas in the heavily populated eastern states, Mildura was to have two television stations — a national service from the ABC and a local commercial channel. Plans to establish television in the region began as early as 1953, three …