The TV Week Gold Logie awarded to actress Rowena Wallace in 1985 has been withdrawn from sale on Ebay. Bidding for the item had originally hit $18,900 but at the closing stages of the auction all pre-existing bids were cancelled, with the seller citing legal reasons, sending the price back to the initial reserve of …

END_OF_DOCUMENT_TOKEN_TO_BE_REPLACED

Permanent link to this article: https://televisionau.com/2012/12/gold-logie-removed-from-sale.html 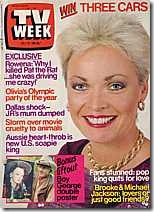 This weekend marks the return of Where Are They Now? on the Seven Network and headlining the return episode is a reunion of cast members from the ’80s soap Sons And Daughters. Included in the reunion will be Rowena Wallace – whose on-screen ‘Pat the Rat’ persona was pivotal to much of the series and …

END_OF_DOCUMENT_TOKEN_TO_BE_REPLACED

Permanent link to this article: https://televisionau.com/2008/11/pat-the-rat-is-back.html