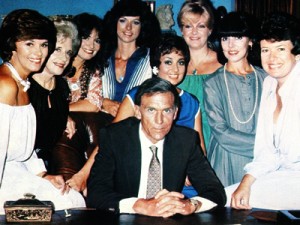 Beauty And The Beast was a panel show first launched by the Seven Network in 1964. The basic premise was to pit a sardonic or sometimes chauvenistic host (‘the beast’) against a panel of females (‘the beauties’) who would respond to viewers’ pressing, or not so pressing, issues.

Eric Baume was the first ‘beast’ and others to follow after his death included Stuart Wagstaff, Rex Mossop, John Laws and Alwyn Kurts.

The original version of Beauty And The Beast last appeared in 1973. In 1982 the format was revived by two rival networks at the same time. The Seven Network revival was headed by Derryn Hinch, while John Laws reprised his role as ‘beast’ for Network Ten’s version. Laws was later replaced by Clive Robertson.

Beauty And The Beast was revived again in the mid 1990s in a joint venture between Network Ten and Foxtel. The production later became exclusive to Foxtel.

Permanent link to this article: https://televisionau.com/flashbacks/beautyandthebeast