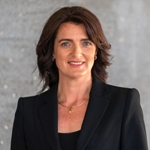 Millar replaces Jo Palmer who resigned from Seven Tasmania last month. Weather presenter Peter Murphy has been temporary newsreader while a replacement for Palmer was being appointed.

Millar’s career began at Southern Cross Network (now Seven Tasmania) thirty years ago and she was weekend newsreader for almost ten years up until 2011. She has also worked as a producer and media trainer as well as MC for corporate and community events.

In a statement issued today, Millar said: “TV studios have always been a big part of my life, so I guess it really is like returning to the family fold. Nightly News on Seven Tasmania has played a significant role in keeping Tasmanians up to date with what’s happening around them. I am eager to maintain that, and alongside a skilled team, continually strive to be the state’s leading and trusted source for local, national and international news.”

Permanent link to this article: https://televisionau.com/2020/03/seven-tasmania-names-new-anchor.html