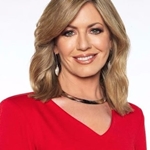 Nine News Regional, the joint venture between the Nine Network and regional Southern Cross, kicks off this Monday.

The first of 15 bulletins to roll out for the network is Nine News Canberra, debuting Monday 6 February at 6pm, presented by former ABC News Breakfast presenter Vanessa O’Hanlon (pictured)

The one-hour bulletin, presented from Nine’s Sydney studio, is a composite of national news with inserts of local news relevant to the Canberra market.

The following Monday the format expands to Nine News Illawarra — with other regions in Southern NSW, regional Victoria and regional Queensland to be progressively rolled out.

O’Hanlon will present the NSW and Canberra bulletins, Jo Hall will present the Victorian editions from Melbourne, and Samantha Heathwood for regional Queensland from Nine’s Brisbane studios.

The format is largely based on the popular NBN News which is based in Newcastle but broadcasts to regions across Northern NSW. (NBN is owned by Nine)

The new-look bulletins have come about following Nine and Southern Cross forming an affiliation last year. As part of the deal Southern Cross pays Nine a significant portion of all revenue received for access to Nine’s programming.

Southern Cross was able to use this premium as leverage for Nine to provide a dedicated regional news service for relay across the Southern Cross Nine regions.

Nine has employed in excess of 80 staff spread across Queensland, New South Wales/ACT and Victoria to support this expanded news coverage.

It is a stark contrast to Southern Cross’ previous local news offerings when it was a Network Ten outlet in Queensland, Southern NSW, Canberra and Victoria — where news coverage was limited to brief two-minute updates inserted into commercial breaks over the course of the day, presented from centralised facilities in Canberra.

Rival regional network Prime7 is responding to Southern Cross’ news changes with its own revamp. From Monday 13 February Madelaine Collignon and Kenny Heatley will jointly present the various Prime7 local news bulletins for NSW and Victoria, which are produced from studios in Canberra.