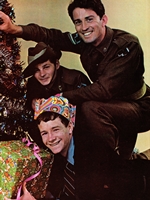 A bit of nostalgia for viewers in regional WIN Television territory on Christmas night.

WIN will be broadcasting a half-hour special, The Sullivans: A Walk Down Memory Lane, to commemorate 40 years since the series made its debut.

The program promises “a walk down memory lane with some of the stars. Lorraine Bayly, Andrew McFarlane and Steven Tandy reminisce about producing this iconic show”.

Crawfords Australia, which produced The Sullivans for the Nine Network from 1976 to 1983, is now owned by WIN, which has been releasing The Sullivans and various other Crawford titles on DVD.

The Sullivans made its debut on 15 November 1976 in Sydney and Melbourne. It was a ratings hit for Nine and was sold to over 30 countries.

Permanent link to this article: https://televisionau.com/2016/12/win-celebrates-the-sullivans.html