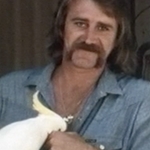 Ian “Beat” Hill, former producer and presenter on NSW regional television, has died from cancer at the age of 65.

Hill had always had an interest in conservation and wildlife but had been working as floor manager at Newcastle station NBN3 in the 1970s. It was after ten years at NBN that he had the opportunity to co-produce and co-host the wildlife series Beating Around The Bush. The program, co-hosted with Art Ryan, was the spin-off from a series of segments presented on NBN’s Breakfast Club.

“We wanted to bring something to people in towns and cities which shows them how to blend with the bush,” he told TV Week at the time. “We want people to know that they don’t have to be a Harry Butler to appreciate the bush. Even in your own backyard, under every rock there’s plant and animal life.”

Beating Around The Bush was produced as a children’s series but also gained a following with adult viewers. It won a TV Week Logie Award in 1980 for Most Outstanding Contribution By A Regional Television Station.

In later years, Hill worked as a freelance television producer and director.

Permanent link to this article: https://televisionau.com/2016/09/obituary-ian-hill.html