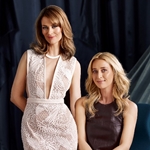 For the political junkies who thought last week’s leadership spill was big news, spare a thought for the Offspring fans who will be besides themselves today with news that the series will be back for a sixth season in 2016.

It’s a win for the fans, likewise for Foxtel‘s recent pick up of the Seven Network series A Place To Call Home, which begins soon.

Offspring was thought to have wrapped up for good in 2014. Storylines were neatly tidied up and Nina Proudman (Asher Keddie, far right, with co-star Kat Stewart) had found calm after the sudden death of her fiancé Patrick Reid (Matthew Le Nevez) — finding love with Leo Taylor (Patrick Brammall) and settling in to her role as mother.

Keddie and Offspring producer John Edwards had moved on to a new series, Party Tricks, though the political drama failed to get picked up beyond a first series.

But, seemingly bereft of a major drama project heading into 2016, the Ten Network has managed to get the team back for another series.

Revisiting the show presents a number of challenges. Starting the creative engines up after a year on the blocks — this time without head writer and co-creator Debra Oswald on board — and trying to get momentum up while recreating the chemistry of the earlier seasons will be a challenge. Not to mention the high expectations of the fans who have long campaigned for the show’s return.

I’m happy with where we took the story by the end of #offspring 5, so I’ve chosen not to be part of S6. I hope fans enjoy the new series.

It is also a financial risk for the Ten Network. After five seasons and 65 episodes, Offspring had reached the end of eligibility for certain tax breaks. By bringing the show back it instantly becomes considerably more expensive to take on.

On a positive note, history does of course provide examples of dramas managing to come back from the dead. Neighbours, of course, being the most prominent example of this — being axed by Seven after six months but going on to become an international success for Ten. After 30 years and over 7000 episodes, the series is still going. 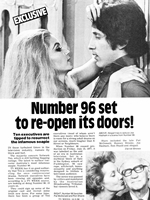 In much earlier days, The Young Doctors in the 1970s was set to be cancelled after its initial 13-week trial run. The reaction from the show’s fans soon led to the Nine Network revising its decision and The Young Doctors went on to a successful six-year run and commanding a loyal fan base in Australia and overseas.

But there is one drama series revival we were once teased about but never came to fruition. In 1990, the Ten Network was in financial strife. It looked to the past to try and boost its future with plans to revive the popular ’70s soap Number 96. It was a plan (pictured) that had potential but never eventuated.

Permanent link to this article: https://televisionau.com/2015/09/its-on-offspring-the-latest-tv-comeback.html