All fired up!
Working in steamy Queensland, wearing heavy fire-fighting gear all day and filming among real flames, you can hardly blame Georgie Parker for describing the five-month making of her new series Fire as “a nightmare”. “It was extraordinarily difficult,” she told TV Week. “The conditions affected everyone’s mood. There were a lot of tempers flaring, a lot of volatile situations… but in a strange way the tension bonded us together. It was most unglamorous shoot I’ve done in my life. But that was part of the bonding again, because we were all the same — we all looked like s***!”. Parker plays the role of Morgan Cartwright, the first female firefighter in Brisbane (in 1995 there are none in real life). Also starring in the series are Peter Phelps, Deborra-Lee Furness, Max Phipps, Shane Feeney-Connor, Andy Anderson, Liddy Clark, Wayne Pygram, Tayler Kane and Aaron Jeffery.

Rebel with a cause
Vince Poletto, a 22-year-old graduate from NIDA, is making his first TV appearance as troublesome Matt Logan in Network Ten‘s Heartbreak High. Matt is a surfing rebel who comes to Hartley High for his last chance at a high school education. “He’s had bad dealings with cops before and been kicked out of a lot of schools,” Poletto told TV Week. “This is his last chance to finish HSC.” And after the death of Nick Poulos (Alex Dimitriades), Matt also strikes up a love triangle with grieving Jody Cooper (Abi Tucker) and her older sister, played by Joy Smithers. 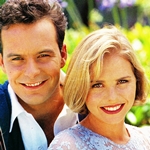 AJ cooks up a show with Andrew
Former E Street star Alyssa-Jane Cook is returning to television in a different role, as co-host of a new Seven Network series, Funniest People, alongside Andrew Daddo. “(Hosting a program) was something that I’d never done before, but something I was interested in exploring,” she told TV Week. “The thing is, you have to be able to do a lot of different things in this field, otherwise you’re not employable.” Funniest People is described as a mix of segments of people doing funny or wacky things with the lure of prizes for the most zany entrants. “It is letting the Australian public have a turn at being fools if they want to be, or stars if they want to be,” Cook said. Funniest People debuts next month. 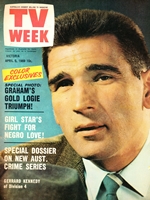 “The TV Week Logie Awards, almost since their inception in 1959, have recognised the importance of new talent and programs aimed at young viewers. Unfortunately, the history of the Logie Awards has not been all that well documented. As far as I can discover from the research material available, it wasn’t until 1969 that an award was introduced specifically for “new talent”. Initially it was called the George Wallace Memorial Logie, but this practice was discontinued, for some reason, in 1978. That first George Wallace Award was won by Gerard Kennedy (pictured), who later went on to prove he had been a worthy recipient (he won the Gold Logie in 1971 and 1972). Many others who followed in his footsteps went on to become major luminaries in Australian, and sometimes international, showbusiness — notable among them are Paul Hogan (1973), John Waters (1975), Garry McDonald/Norman Gunston (1976), Gary Sweet (1982), Peter O’Brien (1986), Jason Donovan (1987), Georgie Parker (1990) and Kym Wilson (1992). I am not trying to suggest that their Logie Awards made them what they are today, but recognition is important, especially for emerging talent, and the Logies should continue to encourage those new on the scene.” 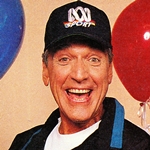 Tuesday: The Seven Network special Homicide — 30 Years On makes its appearance in Tasmania (10.35pm, SCN), featuring footage of the classic cop show and interviews with some of those involved in the series.