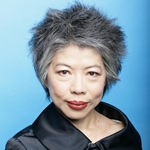 For over 20 years Lee Lin Chin has been the quiet achiever of SBS news. She has read the weekend news with authority and, as the years went on, an insight into her exquisite wardrobe.

Her taste in fashion was also explored in the SBS series Fashionista.

But then, this year, she found herself embracing self-parody via SBS2‘s current affairs program The Feed — uncovering a penchant for beer, filmmaker Lars von Trier and ending any rivalry with a “fight to the death”.

And any appearance of male abs is bound to get the Lee Lin Chin approval rating: Five stars.

Chin’s dalliance with The Feed began in February. Under the guise of having to fulfil “contractual obligations” to SBS, Chin reluctantly scraped below her journalistic integrity to present flimsy showbiz and celebrity stories in “The Celebrity Chin Wag”, and opening the floodgates to an onslaught of “Chin” puns:

Then, after resigning from reading vacuous celebrity gossip, she moved into showing off her culinary prowess with “Lee Linguine”, unleashing more Chin puns (“it’s Chinner time”) and culminating with her making the trek to South Australia (“the butt crack of Australia”), breaking into celebrity cook Maggie Beer‘s kitchen studio and with knife in hand challenging Beer to a bloody battle:

Next, she revealed her playful side by carrying out some prank calls:

She called on her experience to offer helpful advice to viewers and also mentor a journalism graduate on the art of reading the news:

By August, Chin came together with rival network newsreaders Sandra Sully and Natalie Barr in “The Real Newsreaders Of Sydney”. It was an opportunity for her to show off her new bar and to impart some journalistic wisdom onto her commercial TV counterparts. Things turned awry when the accusations, and a stolen Walkley award, start flying:

SBS then expanded her profile with “The Lee Lin Chinnel” — 24 hours a day of Lee Lin Chin:

When SBS’ news boss decided to launch a morning show he thought that Lee Lin Chin should front it. In preparation, she is given a crash course in daytime TV techniques led by Larry Emdur and Kerri-Anne Kennerley. But she discovers that the morning show, Lee Lin Chin’s Cappu-Chin-o, is part of a secret plot to sell off the network:

The year draws to a dramatic climax as an earlier sledge at the ABC makes her the centre of a cross-network battle, fending off bitter rivals from ABC, Seven, Nine and Ten networks in a violent fight to the death:

The playlist of all Lee Lin Chin’s segments from The Feed can be seen on the SBS2 YouTube channel and, thanks to “those nerds” at The Feed, she is also on Twitter.

Permanent link to this article: https://televisionau.com/2014/12/the-rise-of-lee-lin-chin.html