Sundae too far away!
Those who have seen the film The Adventures Of Priscilla: Queen Of The Desert may have seen Ken Radley as the vile redneck drunk in Coober Pedy intent on doing something “something villainous” to Guy Pearce‘s befrocked character. What most may not realise is that Radley portrays a much different role in television… and one you’d never see… as he is sometimes hidden beneath the pyjamas of B1 in the children’s series Bananas In Pyjamas. “Basically, actors love doing varied roles and I feel very fortunate to have done so many,” he told TV Week. “Bananas is wonderful because it’s all play. There’s not a lot of subtext there. For a lot of kids it’s their first introduction to slapstick stuff.” Radley has also appeared in a variety of different roles in series including GP, The Harp In The South, A Country Practice and Home And Away. 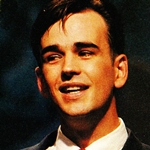 Would you vote for this man?
Comedy trio The Doug Anthony Allstars are calling it quits and one of its stars has political ambitions. Tim Ferguson (pictured) yearns to be a senator in Canberra. He has some political credentials — his father is a former producer of ABC current affairs program This Day Tonight, who led the national capital’s press gallery in the early Eighties. “I’d like to become a real problem for many people — certainly politicians,” he told TV Week. “I think it would be good to give them a real headache by getting into parliament.” Ferguson will also be back on TV screens as part of a new World Series Debating special to screen this week. 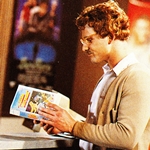 Eric’s ethnic accent
Full Frontal star Eric Bana has brought a close friend into his repertoire of characters. Eddie (pictured), a middle-aged man with a heavy European accent and a somewhat different view of the world, has been with Bana since he was a child. “When I was 10 or 12 I just made up this voice to use on my CB radio — that’s how Eddie was born,” Bana told TV Week. “I was actually a little embarrassed about bringing the character to Full Frontal, because I’ve been so close to him for so long. It was like bringing my teddy bear to work. Eddie is the sort of guy who could walk through the mardi gras and not realise it was gay. He would just see it as a coincidence that there were so many men together. I suppose there is a little bit of my mother’s father in the character… just a couple of traits.”

“Twenty years after the event, you would have thought those of us fortunate enough to have been involved in one way or another — or just present — would have had our blankets over our knees and been quietly nodding off in front of the television by six o’clock on a Sunday evening. So, when the granny of the gurus, Ian ‘Molly’ Meldrum, invited a few of his closest friends to the Circus nightclub in Melbourne to watch the ABC‘s 20th anniversary tribute to Countdown, those of us still able to travel went along. The ranks are thinning, mind you — only about 600 or so turned up. All the talk afterwards revolved around whether or not the impact and success enjoyed by Countdown could be achieved anew. Frankly, I don’t know, but there is certainly no doubting the music industry’s longing for such a potent promotional vehicle, and there’s even less doubt about the ABC being the only network able to provide it.”

Program Highlights (Melbourne, November 12-18):
Saturday: The Australian Grand Prix Trials (12pm, Nine) begin the weekend’s coverage of the 10th Australian Grand Prix to be staged in Adelaide. In A Country Practice (5.30pm, Ten), Harry’s (Andrew Blackman) love life is thrown into chaos when his ex-wife returns to Wandin Valley only to discover a great deal of unresolved anger and a surprising amount of passion. Heartbreak High stars Alex Dimitriades and Abi Tucker are guest hosts of Eat Carpet (11.05pm, SBS), the eclectic mix of short films from around the world. 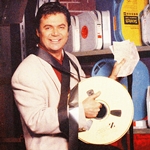 Monday: James Sherry is back with a new series of children’s game show Amazing (4.30pm, Seven). Daryl Somers (pictured) hosts the special Hey Hey By Request No.2 (7.30pm, Nine), featuring more of the most requested segments to have appeared on Hey Hey It’s Saturday, including a 1970s send-up of police show Division 4. Four Corners (8.30pm, ABC) presents its last show for the year 1994.

Tuesday: In Blue Heelers (7.30pm, Seven), a two car collision on the edge of town appears to be routine, until it is discovered that Tom’s wife, Nell, is one of the fatalities; and Tom (John Wood) suspects that the teenage occupants of the other car were over the legal drinking limit. The Investigators (8pm, ABC) and Foreign Correspondent (9.30pm, ABC) both present their final shows for the year.

Wednesday: In Home And Away (7pm, Seven), Shane (Dieter Brummer) and Angel (Melissa George) excitedly look forward to a traditional white wedding. The latest installment of World Series Debating (8.30pm, ABC) debates the topic ‘That Lawyers Have Lost Their Appeal’.

Thursday: Beyond 2000 (7.30pm, Ten) presents its Technology Grand Final — showing innovation and imagination from schools around the country; and looks at the ‘information super-highway’, where it’s taking us and when will we get there. In the series final of Janus (8.30pm, ABC), Peter Faithful’s (Simon Westaway) evidence against Steve Hennessey (Leon Teague) and Darren Mack (Nique Needles) is extremely incriminating.

Friday: In Neighbours (6.30pm, Ten), Mark (Bruce Samazan) is upset about finding Annalise (Kimberley Davies) in a compromising position with a male stripper.