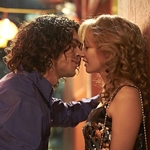 The new ratings year got off to a huge start last night with four networks rolling out their big guns.

Seven‘s night started with My Kitchen Rules followed by Sunday Night and then the much-publicised mini-series INXS: Never Tear Us Apart (pictured).

Network Ten had the series revival of So You Think You Can Dance followed by the Winter Olympic Games, including the heavily-promoted appearance of Aussie competitor Torah Bright‘s attempt at an Olympic medal.

ABC1 had the new series of Rake.

But it was Nine that played its cards at the last minute by shifting its telemovie Schapelle from Monday to Sunday night at short notice — a move that looks like it didn’t do it any favours.

INXS: Never Tear Us Apart topped the overnight figures with 1.974m viewers across the five cities (OzTAM). Seven also had the next three rankings with Sunday Night (1.793m), My Kitchen Rules (1.640m) and Seven News (1.292m).

Schapelle was further down the list — in seventh place — with 1.022m viewers. It was beaten by The Block: Fans V Faves (1.274m) and Nine News (1.223m). Schapelle‘s numbers may be reviewed once the late finish time is taken into account.

Ten’s So You Think You Can Dance returned to a disappointing 466,000 viewers, while the Women’s Snowboard Slopsestyle Final, featuring Torah Bright, was watched by 996,000 plus a further 218,000 viewers on One.

Data © OzTAM Pty Limited 2014. The Data may not be reproduced, published or communicated (electronically or in hard copy) without the prior written consent of OzTAM.

Permanent link to this article: https://televisionau.com/2014/02/inxs-wins-first-ratings-battle.html