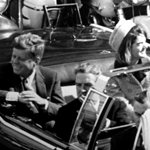 While the assassination of US President John F Kennedy took place in Dallas, Texas, in the afternoon on Friday 22 November 1963, the time difference meant that Australians woke up to the news on the Saturday morning.

Australian TV was only seven years old at the time and never before had it needed to pull together coverage of such a shattering event from the other side of the planet, and without the satellite communication that we now take for granted.

In Melbourne GTV9 normally started its Saturday morning schedule at 7.30am. The channel opened the day with a news flash including early “radio pictures” received by the newspapers.

ABV2 also started its program day with a special news bulletin including library film and radio pictures. HSV7 went to air around lunchtime with a 15-minute news bulletin and included news updates, including obituary films, during the afternoon. 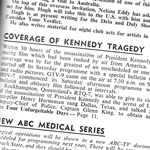 But it was regional station RTQ7 in Rockhampton, Queensland, that scored a coup when news producer Henry Horneman made a phone call to Dallas and broadcast a 12-minute conversation with the Deputy Chief of Police, Captain Glenn King, to obtain an on-the-spot account of the event.

Normally it would take several days for film of overseas news to reach Australia, but the gravity of the event saw film of the assassination rushed to Australia for broadcast within 30 hours.

TV Times critic John Pacini (pictured) described the Australian coverage over the weekend as “television at its greatest”: 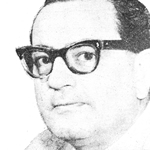 “No people in the world except those close to the scene in grief-stricken America itself could have expected a more comprehensive or speedy coverage of President Kennedy’s assassination than the Melbourne TV channels provided. ”

“Within a few short hours we were witnessing half-hour programs of carefully edited newsreel films of the late President’s life, flashed stills of the site of the catastrophe and even the arrest of the suspected murderer. And we were listening to some of the best written and narrated commentaries I have ever heard in seven years of television viewing.”

“We saw the magic of the most modern communications media in our lifetime exploited in the hands of deft news technicians. In less time than it’s worth counting and in the comfort of our homes we were seeing the first prints of the history books of tomorrow.”

“It was television at its greatest… providing a real service that has never been surpassed. This, then, is a tribute — from a critic who has never pulled any punches.”

“Only congratulations are due to all television channels for their handling of the news of President Kennedy’s tragic death. Not before, if memory serves me, have they been required to bring to the public the details, background and ramifications of such a routine-shattering event and it is to their credit that they treated it not only with surprising efficiency but with dignity.

To those unacquainted with the exigencies and problems of modern news-gathering the speed with which the full story was collated and presented may not have held any great significance. But it was nothing short of remarkable what we in Melbourne were watching the whole playing-out of this terrible drama not many hours after it occurred in a city in the deep south of the United States.

That, of course, was made possible by the alacrity and thoroughness with which American television people went into action and by the speed of inter-continental aircraft.”

Permanent link to this article: https://televisionau.com/2013/11/australians-woke-up-to-jfk-news.html