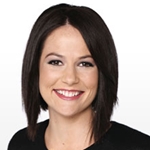 Less than three weeks since its launch, Network Ten‘s Wake Up has made a change to its line-up with the removal of Natasha Exelby (pictured) from the program.

No announcement has been made regarding a replacement third co-host to sit beside Natarsha Belling and James Mathison.

The network announced the decision in a statement issued this morning:

Wake Up will continue to be hosted by Natarsha Belling and James Mathison, with Nuala Hafner presenting local news for every state. Ms Exelby will remain with Network Ten’s News division.

“I have said repeatedly that chemistry is everything at breakfast and, right now, I don’t think the balance is correct. It’s up to producers to fix those things. I also saw genuine spark during show rehearsals, but sometimes, that doesn’t translate on air. That is nobody’s fault, except mine.”

Wake Up has only managed a small share of the breakfast audience. Its debut had an average audience of 52,000 (OzTAM, 5 cities) and while it is accepted that viewing habits take a long time to change the show has failed to top that since.

Rival programs Sunrise and Today both reach averages over 300,000 on a daily basis.

The network has said there are no changes to the presenting line-up for mid-morning chat show Studio 10.

Permanent link to this article: https://televisionau.com/2013/11/early-shake-up-for-wake-up.html