Network Ten personality Rove McManus was awarded the Gold Logie for Most Popular Personality on Australian TV at the 45th annual TV Week Logie Awards, held at the Crown Entertainment Complex, Melbourne, on Sunday, 11 May 2003.

The Gold award was presented to McManus by Dame Edna Everage, who had recently been in the US with a successful stage show and a role in series Ally McBeal.

“I thought my opportunity to hopefully take this was still a couple of years off, so I feel very privileged to have received it,” McManus said in accepting the Gold.  “It seems like only yesterday I was a young, green kid on Channel 31.”

McManus collected three Logies that night.  As well as the Gold he’d also won the new Silver Logie for Most Popular Presenter, while his program Rove Live won Most Popular Light Entertainment/Comedy Program.

The night started with an opening number performed by Dannii Minogue (her first appearance at the Logies in over a decade), Sophie Monk and Bec Cartwright.  There was also a performance by Neighbours star Delta Goodrem, and Crocodile Hunter Steve Irwin did his best snake-wrangling routine on stage — although Sports Tonight host Tim Webster wasn’t smiling when the carpet python took a bite.

Eddie McGuire (pictured) was the Logies host for the first time.  In TV Week‘s preview of the Logies, McGuire said: 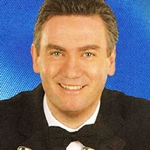 “This is the 45th TV Week Logies, and they have lasted this long because they mean a lot to people.

“My ambition as host is to showcase Australian television.  It’s not my show but I will be pulling the night together.  Mind you, the fact that I’m not a Gold Logie nominee has broken my heart!”

The Logies’ overseas guest was US actor Dennis Haysbert from the series 24.  Also making a guest appearance was actor Simon Baker, the Aussie star appearing in the US series The Guardian.  Ten years earlier Baker, then Simon Denny of E Street, had won the Logie for Most Popular New Talent but had lamented his pending unemployment as E Street had just been cancelled.  “One minute I’m winning this award and being placed into a star category, but in 10 weeks’ time I’m going to be unemployed,” he said back in 1993.

It was a big night for Seven Network drama All Saints, with the series winning the Logie for Most Popular Australian Program, Erik Thomson winning Most Popular Actor and Libby Tanner for Most Popular Actress.  For Thomson the award came after his character Mitch had exited the series after four years.  “I’m just very happy that I have got this award.  It’s a fitting end to the character,” he said. 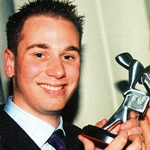 Network Ten‘s The Secret Life Of Us won the Logie for Most Outstanding Drama Series for the second year running, and series star Claudia Karvan won Most Outstanding Actress.  “I’m not used to having my name read out,” Karvan told TV Week.  “I get nominated a lot but I never win anything.”

Peter O’Brien, from White Collar Blue, won the Logie for Most Outstanding Actor, following his return from working on UK series Cardiac Arrest and Queer As Folk.  “It’s great to come back home and have your efforts acknowledged,” he said. 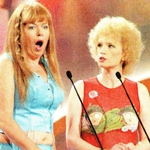 Kath And Kim, the ABC sitcom featuring the characters previously featured in sketch comedy shows Big Girl’s Blouse and Something Stupid, won the Logie for Most Outstanding Comedy Program.  Jane Turner, who plays Kath Day-Knight (pictured far right), attributed some of the show’s success to her mother.  “She’s got a turn of phrase that Kath borrows,” she said.  “But she’ll kill me for saying that.”

ABC series Australian Story was awarded Most Outstanding Documentary Series, while Nine‘s Sunday won Most Outstanding Public Affairs Program.  Sunday host Jana Wendt said the win was reward for the hours put into the program by its small team.  “It’s a mammoth amount of work for everyone involved,” she said.  “It’s nice to be in a peer-judged category and we had tough competition.”  (The other nominees were The 7.30 Report, Dateline, Foreign Correspondent and Lateline)

The award for Most Outstanding News Coverage was a tie between “The al-Qaeda Tapes” (ABC News) and “Bali Explosion” (National Nine News).

The Nine Network’s RPA won the Logie for Most Popular Reality Program.  “I’m shocked,” said executive producer Danny Milosavljevic.  “We were up against Big Brother — the landscape has changed quite a bit.”

Veteran entertainer and former TV host Don Lane was inducted into the TV Week Logie Awards‘ Hall of Fame.  His  acceptance speech was the longest of the night, and it was also the most emotional as not only did Lane get teary but so did others in the audience.  “I really couldn’t help it,” he later said.  “They showed 38 years of my life.  I’m still snivelling.” 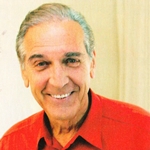 Permanent link to this article: https://televisionau.com/2013/04/tv-week-logie-awards-10-years-ago-2.html