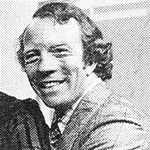 Former Western Australian radio and TV personality Peter Dean has died at the age of 74, from motor neurone disease.

Dean was a radio presenter in the 1960s and ’70s at Perth stations 6IX and 6PR — including co-hosting a top-rating breakfast show with John Fryer for sixteen years — and a newsreader at STW9.

During the 1970s he appeared with Fryer on TVW7‘s Saturday night variety show, Anything Goes — a program that won a TV Week Logie for Most Popular Program in Western Australia.

He is also remembered for his ongoing support for TVW7’s annual Telethon.

“We were a bit naughty — we had strippers on and a few things that people seemed to enjoy.  Peter would do anything… rip his shirt off… but then Peter was that sort of guy. If it was fun, he was in it.”

“Deano was a classic entertainer, always ready with a quip, always ready to ad lib out of danger and sometimes into danger!  There was never a dull a moment.  He set the standard for live performance in WA, and he had an enormous heart, being a key star of Telethon for many, many years.”

Peter Dean is survived by wife Delys and their four children.