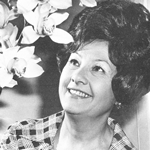 Former Melbourne radio and TV personality Binny Lum has died peacefully after a short illness at the age of 97.

Lum was born in Adelaide to a Chinese father, a well-respected doctor of traditional Chinese medicine, and Australian mother.

Her career in broadcasting was predominantly in radio, working at Melbourne radio stations 3XY, 3AW, 3DB, 3AK and 3KZ and the regional Victorian Broadcasting Network, but she was a TV pioneer as the host of Melbourne’s first daytime program, Thursday At One, a weekly one-hour session which debuted on GTV9 on 6 June 1957.

In the late 1960s she appeared on another daytime program, Woman’s World, for rival channel HSV7, appearing with John Eden and Belle Nicholson and later with Jon Sidney, Vi Greenhalf, Terry O’Neill and Charles Skase.

During the course of her career she interviewed a diverse range of visiting overseas celebrities, from Charlton Heston to Rudolf Nureyev, and while overseas herself had scored an interview with The Beatles that was syndicated across Australia.

In the later stages of her career she wrote restaurant reviews for Leader Newspapers.

The full tribute to Binny Lum, written by her daughter Sharon Terry, is on The Age website.

Permanent link to this article: https://televisionau.com/2013/01/obituary-binny-lum.html