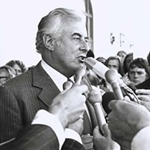 Later this month it will be 50 years since ABC launched its television service in Canberra.

On Tuesday, 18 December 1962 at 7.30pm, ABC3 was officially opened from the transmitter on Black Mountain and essentially operated as a rebroadcast of ABN2 from Sydney with some local content inserted.

The station was the first in the ABC’s next stage of the roll out of the national television service — with 32 other stations to be launched in major regional centres across the country over the following four years.

To celebrate 50 years of ABC television in Canberra ABC News 24 will be screening the documentary Who Makes The News?  The program will look at the ongoing relationship between politics and television, including news footage from some the biggest political stories to come out of the national capital over the past 50 years.

Permanent link to this article: https://televisionau.com/2012/12/abc-celebrates-50-years-from-canberra.html