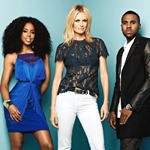 While the Nine Network has had some good news, their rivals at Ten are having a less cheerful time.

Although Ten will still likely finish the year as the traditional third most-watched network, its post-Olympic relaunch has seen its ratings fall to fourth place behind the ABC for the first time in memory.  New Australian programs Being Lara Bingle, The Shire, Everybody Dance Now (pictured), I Will Survive, Don’t Tell The Bride and the return of Can Of Worms have all yielded poor ratings results.  The recent telemovie Underground: The Julian Assange Story presented Ten a rare glimmer of ratings hope.

Breakfast, which launched back in February, continues to flounder in the competitive early-morning timeslot, and viewers have abandoned Ten’s mid-morning line-up in the wake of cancellation of The Circle.

Ten CEO James Warburton — the former Seven Network executive who took charge of Ten in January this year — has announced at its full year results briefing to shareholders that Ten Network Holdings is reporting a $12.9 million loss for the year to 31 August 2012 — compared to a net profit of $14.2 million for the same period a year ago:

“This is a disappointing result and we are focused on turning Ten around through improved ratings, revenue and cost management.  Undoubtedly we are operating in challenging market and competitive conditions, which have impacted our revenue performance.

“We have responded and secured significant cost savings in the year. We are now undertaking a Strategic, Operating and  News Review to further reduce costs.”

The company was also dealt a blow earlier this week when the sale of its outdoor advertising business Eye Corp fell through, with potential buyer Outdoor Media Operations (OMO) backing out of the deal.  The sale of the business was expected to bring in around $120 million.

The Board has decided not to pay a final year dividend to shareholders compared to a 52.5 cent dividend paid out this time last year.

The network has also announced a review of operations across the network, with plans for staff redundancies in a bid to further cut costs.  Although the network hasn’t said how many positions it expects to cut in the review, reports suggest that around 100 positions could be cut across the network.  This follows an earlier round of staff cuts last year under interim CEO Lachlan Murdoch.

Ten is also looking to trim costs in “centralising” functions of its news department, in particular the establishment of a “national news desk” in Sydney to streamline news production.  A spokesperson for Ten said that there no plans to axe the locally-based news bulletins in each capital city — Ten News At Five is currently the network’s highest rating program even though it airs outside of prime-time and attracts fewer viewers than it has in previous years.

It is not known what other cost-cutting measures are planned as part of the review of operations.

Next week Ten will hold presentations media agencies and advertisers to announce its programming strategy for next year.

Ten’s share price is currently at just under 31 cents, compared to around $1.30 two years ago.

Permanent link to this article: https://televisionau.com/2012/10/financial-results-open-a-can-of-worms.html