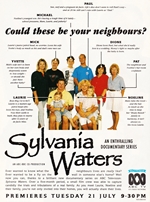 To anyone who remembers Australian TV from the early ’90s the names ‘Noeline’ and ‘Laurie’ will be instantly recognisable — for they were the trailblazers for the program genre we now know as ‘reality TV’.

In Sylvania Waters, viewers were given a fly on the wall glimpse of life with the Baker-Donaher clan, with much of the activity based around Noeline and Laurie’s lavish waterside home in the Sydney suburb of Sylvania Waters.

The 12-part series, a joint production between ABC and BBC, was the culmination of five months of filming over the summer of 1991-92.  While such programs had been done before in the United Kingdom, Sylvania Waters was a first for Australia — and viewers loved it.  It seemed everyone had an opinion on outspoken Noeline and her family as their laughs, squabbles, extravagances and social commentaries were played out on national television.

With the new kids on the reality TV block — The Shire — dominating social and media discussion during its debut last week, Nine’s A Current Affair last night reacquainted viewers with Noeline and Laurie.

The couple have long vacated the surrounds of Sylvania Waters and are now based on the Gold Coast.  They talked to ACA reporter Brady Halls about the pitfalls of having their suburban life turned into prime time TV — something that these days would seem obvious to anyone wanting to take part in such a program, but in hindsight they recall their naivety as to how they would be portrayed when five months of footage is cut down to 12 half-hour episodes, tailored for a British audience hyped up by the local tabloid press.

And they suspect that their current day counterparts at The Shire are being remunerated more than the $2000 they each received for having cameras follow them for five months for their fifteen minutes of fame… and subsequent years of infamy.

The A Current Affair story can be viewed at their website.

Permanent link to this article: https://televisionau.com/2012/07/aca-visits-noeline-and-laurie.html