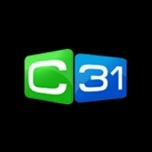 C31, Melbourne’s community television channel, is soon to join its Sydney counterpart TVS in an early shutdown of its analogue signal – well ahead of the scheduled shutdown of other analogue services in their respective cities.

On their website, C31 advises that it will cease analogue transmission (from UHF 31 and from UHF 64 in South Yarra) on Thursday 1 March, even though the analogue shutdown is not scheduled for Melbourne until late 2013.

From 1 March, viewers will only be able to access C31 on digital television channel 44 (UHF 32 from Mount Dandenong, or UHF 66 from the South Yarra translator).

The shutdown of the analogue signal marks an end to over 17 years of transmission from UHF Channel 31, dating back to when the channel first launched in October 1994.  Back then, Channel 31 was broadcasting a program schedule only on Monday to Thursday evenings and on Saturday nights broadcast live coverage of races from Harness Racing Victoria, then a sponsor of the channel.

C31 now broadcasts 24 hours a day, 7 days a week and also has some programs available via a catch-up facility on their website.

TVS will also be closing its analogue signal from 1 March, while Brisbane’s 31 Digital and Perth’s WTV are already broadcasting solely in digital.

Permanent link to this article: https://televisionau.com/2012/02/c31-joins-early-analogue-switch-off.html