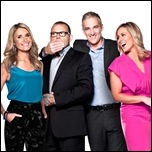 Breakfast will be fronted by Andrew Rochford (The Block, The Project and recently breakfast co-host at Mix 106.5 in Sydney), Kathryn Robinson (Ten News), Magdalena Roze (The Weather Channel, Ten News) and outspoken New Zealand presenter Paul Henry, who was signed up for the new program for $NZ1 million by Ten’s interim CEO Lachlan Murdoch.

Even before Henry makes his Australian TV debut, his appointment to the network has already sparked divisive debate largely due to controversial comments made while host of TVNZ’s own Breakfast program which led to his resignation from the national broadcaster and subsequent million-dollar offer to cross the Tasman.  He will also continue to appear on New Zealand television with plans to host a weekly comedy show on commercial network TV3.

Ten’s head of news and current affairs, Anthony Flannery says Breakfast aims to be ‘must-see’ TV for Australians as they start their day:

“Breakfast is a tough, competitive environment and we can’t wait to get into the game. Already, the opposition is taking cheap pot shots – I couldn’t be happier that they’re taking us so seriously, so soon.”

“We plan to make Breakfast a must-watch part of Australia’s day. From fact to fun, it’s going to be a fresh start to the morning TV schedule.”

The new show will have a tough job ahead of itself, entering a market dominated by the long-running Today and Sunrise programs as well as alternatives ABC News Breakfast and Sky News’ First Edition and AM Agenda.

Ten’s new show will also be under pressure to deliver numbers to lead in to mid-morning show The Circle which currently suffers by not being handed a large audience from the preceding early morning children’s shows.  The Circle, despite winning a TV Week Logie last year for Most Popular Light Entertainment Program, is currently rating well behind Seven’s The Morning Show and Nine’s recently-launched Mornings.

Permanent link to this article: https://televisionau.com/2012/02/tens-ready-to-rise-for-breakfast.html