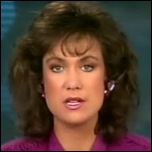 A Current Affair last night presented a tribute to host Tracy Grimshaw to commemorate her 30 years at the Nine Network.

Starting at Nine as a reporter for National Nine News in Melbourne, Grimshaw later gained a national profile as a daytime newsreader and guest presenter on Graham Kennedy’s Coast To Coast.

In 1995, Grimshaw and actor David Reyne were an unlikely pairing for the revamped Midday as the show returned in a new format after a year hosted by Derryn Hinch.

The Midday experiment failed – with Kerri-Anne Kennerley replacing the pair, presenting a revamped variety format in 1996 – but Grimshaw then moved to the early morning Today, co-hosting for many years with Steve Liebmann and then Karl Stefanovic.

She left Today to take on hosting ACA in 2006.  While the story mix on ACA and its rival Today Tonight generally skew towards an almost identical lineup of lightweight topics such as grocery prices, diet fads and retail promotions, Grimshaw’s journalistic background has given ACA some point of difference in that she is allowed the occasional opportunity to interview certain newsmakers or people in the spotlight – winning a Walkley award for television interviewing in 2009, a year which saw her conduct a number of exclusive interviews on the program, including an interview with disgraced former footballer Matthew Johns after details of a group sex scandal had emerged.

The video of last night’s tribute can be found at the ACA website.

Permanent link to this article: https://televisionau.com/2011/06/tracy-grimshaws-30-years-at-nine.html