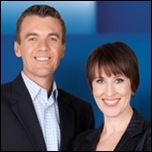 National broadcaster ABC is about to make its anticipated swap of early morning programs between its primary channel ABC1 and digital channel ABC2.

From Monday 2 May, ABC1’s weekday morning children’s programming block – 6.00am to 9.00am – will be shifting to ABC2.  At the same time, ABC2’s broadcast of ABC News Breakfast (hosted by Michael Rowland and Virginia Trioli, pictured) is moving to ABC1, while continuing to broadcast live each weekday morning on high-definition channel ABC News 24.

ABC News Breakfast has been broadcast on ABC2 since it debuted in November 2008 and started on ABC News 24 when that channel launched last year.  The move to ABC1 will coincide with some new segments on the program, including a regular political discussion ‘The Party Line’, featuring leaders and decision makers, as well as increased emphasis on local and regional news.

ABC’s Director of News Kate Torney said the move of ABC News Breakfast brings it in line with the broadcaster’s other news and current affairs programs which also feature through the day on ABC1:

“ABC News Breakfast’s move to ABC1 strengthens the network’s live news coverage on the main channel, and offers more quality news from the start of the day, and right throughout, with the Midday News, regular news updates during the afternoon, the 7pm News bulletins, and completing the day with 7.30, Lateline and Lateline Business.”

The move of the early morning children’s programming to ABC2 basically extends ABC2’s children’s schedule, predominantly aimed at viewers up to age 5, to 13 hours a day – starting at 6.00am and going through to 7.00pm.  This is in addition to the broadcaster’s dedicated children’s channel ABC3, aimed at the older end of the children’s age bracket and young teens, which broadcasts from 6.00am to 9.00pm every day.

The move of the early morning children’s line-up to ABC2 will coincide with the world premiere of the animated series of Bananas In Pyjamas, screening weekday mornings at 8.00am from 2 May, followed by a new series of Sesame Street.

Permanent link to this article: https://televisionau.com/2011/04/abc-swaps-early-morning-programming.html