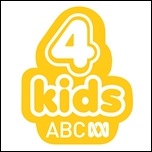 ABC’s channel re-branding continues, with ABC For Kids On 2 to be re-named ABC 4 Kids from Monday 2 May.  The new logo bears a resemblance to that of ABC’s children’s channel ABC3 which launched in 2009. The change is timed to coincide with the expansion of digital channel ABC2’s pre-school children’s line-up to include …

END_OF_DOCUMENT_TOKEN_TO_BE_REPLACED

Permanent link to this article: https://televisionau.com/2011/04/abc-for-kids-becomes-abc-4-kids.html