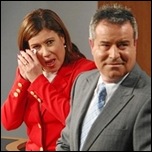 It was an end of an era for local television in Albury on Friday night with the final news bulletin from the Prime7 studios in Union Road, Lavington.

The newscast marked the end of over 46 years of production from what was initially AMV4 before it later became part of the Prime regional television network.  The network was re-named Prime7 earlier this year.

Newsreader Helen Ballard (pictured with colleague Paul Murphy) gave a tearful farewell as the bulletin came to a close:

“It’s been a privilege to be invited into your lounge room every night with the news from across our region.  It’s been an honour to play such an important role in our community as presenter of your local news.

“For the final time, thanks for joining us and good night.”

Former and current employees, friends and families packed the normally-quiet control room at the studios to witness the final news bulletin going to air.

From Monday the Albury edition of Prime7 News will be presented by Daniel Gibson, who will present the half-hour bulletin from studios in Canberra.

Ballard, who has been with Prime7 since 2001, will stay based in Albury as a senior reporter.

The move to the Canberra-based studios will coincide with a change of timeslot for the Albury newscast -– moving from 5.30pm to 6.00pm, putting it up against WIN’s local relay of Nine News from Melbourne.

The Melbourne edition of Seven News will now follow Prime7 News at 6.30pm, with Today Tonight now moved out of the schedule in Albury.  For the rest of regional Victoria, Seven News and Today Tonight will continue in their usual 6.00pm and 6.30pm timeslots on Prime7. 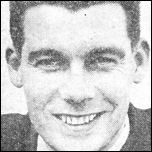 But despite the belated debut of ABAV1 and AMV4, local viewers were quite familiar with the television medium.  Many households had erected large antennas so that they could receive television transmission from Shepparton stations GMV6 and ABGV3 which had been broadcasting since 1961 and 1963 respectively.  Local GMV6 personalities had also visited Albury for promotional efforts prior to AMV4’s arrival.

In the early 1970s AMV4 merged with Wagga Wagga television station RVN2, with both channels soon linked by microwave and the eventual  transmission of a common program schedule across both channels from the RVN2 studios –- though AMV would continue to produce news locally from Albury until June 1987 when RVN began producing a single evening news bulletin for both markets.  The move was unpopular and production of the Albury-based bulletin was restored early in 1988. 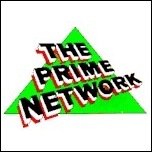 In the mid-1980s, RVN-AMV and Orange-based station CBN8 formed a new regional television network, The Prime Network.  The new network soon struck up an affiliation with the Seven Network for the supply of programs as the Federal Government’s aggregation policy was looming, requiring regional networks to align with a capital city network.

By 1989, AMV’s operations were “de-merged” from RVN2 as Wagga Wagga became part of the Southern NSW aggregated market with CBN8 and AMV was to operate as the hub for Prime’s expansion across the regional Victorian market via aggregation.  In 1992, aggregation came to Victoria with Prime expanding across the state in competition with Ballarat-based VIC TV (now WIN) and Bendigo-based Southern Cross Network (now Southern Cross Ten).

The move of Prime’s local news bulletin from Albury follows similar moves from Prime’s Wagga Wagga (ex-RVN2) and Orange (ex-CBN8) studios to the centralised facility based in Canberra.

Permanent link to this article: https://televisionau.com/2011/03/prime7-signs-off-from-albury.html