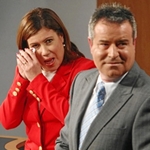 It was an end of an era for local television in Albury on Friday night with the final news bulletin from the Prime7 studios in Union Road, Lavington. The newscast marked the end of over 46 years of production from what was initially AMV4 before it later became part of the Prime regional television network.  …

END_OF_DOCUMENT_TOKEN_TO_BE_REPLACED

Permanent link to this article: https://televisionau.com/2011/03/prime7-signs-off-from-albury.html