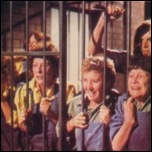 Late last year it was reported that pay-TV channel 111Hits was planning to start a late-night re-run of classic Aussie soap Prisoner from Australia Day this year.

The channel seemingly had a change of heart, withdrawing the announcement soon after it was made, but have now set a new date and timeslot for screening the series that originally ran from 1979 to 1986 and to this day continues to command a popular following both in Australia and overseas.

Prisoner is now set to appear on 111Hits weeknights from Monday 7 March – starting at episode one – at the earlier timeslot of 6.30pm, putting it up against free-to-air contemporary dramas Neighbours and Home And Away.

The gritty backdrop of Wentworth Detention Centre will obviously present viewers with a more grown-up drama alternative in the early evening as opposed to the goings on around Summer Bay or Ramsay Street.  Pay-TV channels are not bound by the same classification restrictions that free-to-air channels are subjected to.

111Hits also has a “+2” channel, so Prisoner will therefore get another run each weeknight at 8.30pm.

111Hits is available on Foxtel and Austar.

Permanent link to this article: https://televisionau.com/2011/02/take-2-for-prisoner-airdate.html