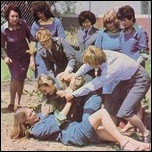 Andrew Mercado reports that the long-running series is about to make a comeback to Australian TV screens – on pay-TV channel 111HITS, starting on Australia Day, 26 January, at 10.30pm.

111HITS will be screening the series from the first episode – which first went to air in February 1979.

The series, which continued production until 1986, had a full re-run on pay channel UKTV some years ago and also had a late-night re-run on Network Ten in the early 1990s.  Ten did start a daytime re-run of Prisoner in October 1996 but it was abruptly cut short after only a few months and the series has yet to appear again on Australian free-to-air TV.

All 692 episodes of Prisoner have been released on DVD.

This news comes a few months after Network Ten announced it was set to explore the prison theme again for a new drama series, Inside Out.

111HITS is available on Foxtel and Austar.

Permanent link to this article: https://televisionau.com/2010/12/prisoner-returns-to-australian-tv.html