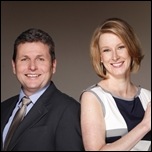 ABC’s long-running current affairs program The 7.30 Report is about to get a refresh – with new hosts and a new name.

From March next year, the program will be re-named 7.30 and will have two hosts, Leigh Sales and Chris Uhlmann, replacing Kerry O’Brien who is soon to finish up on the program after 15 years.

The changes come as The 7.30 Report reaches its 25th anniversary.  The program was launched in January 1986 from the remnants of the short-lived news and current affairs experiment, The National, which had wound up after less than a year on air.

The 7.30 Report began as a state-based current affairs program from each capital city and from 1996 was re-launched as a national program, hosted by O’Brien.

The change to the 7.30 brand will also affect the Friday night current affairs program Stateline, though it will continue to cover local issues each Friday in each state and territory – and if a big local story breaks during the week, 7.30 will cover the news at a local level.

As well as 7.30, the new year will signal another change for ABC news and current affairs – with morning program ABC News Breakfast being moved from digital channel ABC2 to the main ABC1 channel.  The transition will allow the block of children’s programming that currently appears on ABC1 each weekday morning to move to ABC2, coinciding with the expansion of the ABC For Kids brand on the digital channel.

In another program milestone, next year will also mark the 50th anniversary of current affairs program 4 Corners.

Permanent link to this article: https://televisionau.com/2010/12/coming-soon-the-7-30-refresh.html