Ten goes back behind bars 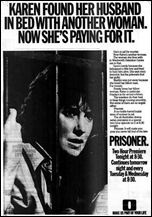 Prisoner was a surprise ratings hit when it debuted on the otherwise-ailing 0-10 Network in February 1979.  The never-before-seen tale of life inside a women’s prison was groundbreaking drama and also presented a milestone in featuring a predominantly female cast (including Peta Toppano, pictured).

The series ran for eight years and 692 episodes, winning a swag of TV Week Logie awards, and was one of the few Australian dramas to get a cult following in the US before it went on to a similar following in Europe and the United Kingdom.  The series was later re-worked for the US market as Dangerous Women.

Such was the sustained popularity of Prisoner twenty years after its demise that all 692 episodes were released on DVD – the largest such DVD release in Australia.  Fans from around the world still come to Australia to pay homage to the series and some of the stars from the show (such as Maggie Kirkpatrick, who played Joan ‘the Freak’ Ferguson, pictured below) are still household names today.

Despite foiled plans to produce a spin-off series in the 1990s, the Ten Network is now set to reconnect to the prison theme with a new series unveiled at its recent 2011 launch. 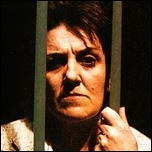 Inside Out promises to tell the story of a woman who lands in prison after being wrongly accused and sets out for revenge.

Ian Bradley, a co-producer from Prisoner, is working on the new project which Ten hopes will spin-off into an ongoing series.

“We’re very excited about it.  We’ve looked at Prisoner for some time now and wondered whether it’s time to revive the style of that show.”

A couple of years ago there were tentative plans by Ten to re-work another former series, The Young Doctors, to a new generation of viewers but this was soon abandoned.

Network Ten will be anxious for Inside Out to succeed now that it has announced plans to ship Neighbours off to its new digital channel, 11, where it may end up being excluded from counting towards the network’s required quota of local drama content.

Ten also announced at the 2011 launch that it has renewed its new Melbourne-based drama Offspring for another series following strong ratings results since its launch last month.

Permanent link to this article: https://televisionau.com/2010/09/ten-goes-back-behind-bars.html