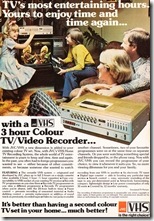 Reports on the death of the VCR have been greatly exaggerated.

Yesterday it was reported that Freeview was about to embark on a campaign to declare “the VCR is dead” – presumably to promote the technological advantages of switching to Freeview-branded equipment for managing the viewing of digital broadcasts.

Today, Freeview has responded to these reports with the following statement:

Freeview, Australia’s free digital television service, today moved to correct inaccurate reports in the media that it is planning an advertising campaign about the future of the VCR.

Media reports have this week suggested that Freeview will soon roll out an ad campaign proclaiming that the VCR is dead. These reports are incorrect and Freeview is not intending any ad campaign about the VCR.

Freeview CEO Robin Parkes said: “Speculation in the media this week that Freeview is planning an ad campaign about the VCR is not correct.

“We do have plans for an exciting new advertising campaign which will be launched soon highlighting the many benefits viewers of Freeview free digital TV for Australian viewers, so stay tuned,” she said.

Permanent link to this article: https://televisionau.com/2010/03/the-vcr-isnt-dead-says-freeview.html