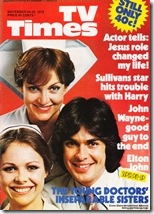 Sisters: For better and worse!
Although Rebecca Gilling and Diana McLean (pictured, with co-star Peter Lochran) are only sisters on-screen, as Nurse Liz Kennedy and Sister Vivienne Jeffries in The Young Doctors, their friendship off-screen has similar characteristics.  “On camera, I have a similar relationship with Diana as with my own sister Tracy, in that we do have our ups and downs, do tend to take each other for granted.  But in a crunch, we stick together!” Gilling told TV Times – though their separate childhoods were quite different.  McLean was essentially brought up as an only child as her older brother had died from Down’s syndrome at the age of 8:  “I grew up in a grown-up world, with few close relatives, except my maternal grandmother.  Like most only children, I was always conscious of wishing I had lots of brothers and sisters.  Then my mother was stricken with cancer and died when I was 13.  During the previous six years she was ill, I was cared for by a maid and my grandmother.  Sounds like a poor little rich girl, doesn’t it?  But it’s true, I had everything I wanted but nothing I really wanted.”  Rebecca Gilling was the youngest of four children.  “My mother has a highly individual approach to rearing children.  Both my parents encouraged us to have very strong personalities and a strong sense of humour.  The four of us were all very close when we were small.  Being the youngest has its perks and its serious drawbacks.  There was always the dichotomy of being one minute too young – and the next being told, why don’t you grow up?  It also meant I wore hand-down clothes which were a bit battered by the time they’d gone through three tomboys.  Then, when I was 12, I retaliated by growing taller than the others.  Then I had to get new clothes.” 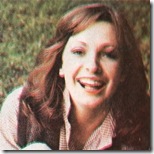 Brush with the law!
Liz Burch (pictured), the girl from the toothpaste commercials, is the new girl in Cop Shop – and it’s given her a ring of confidence.  The 24-year-old joins the series as Vic Cameron’s (Terry Donovan) younger sister, Liz Cameron.  It is her first big break in TV after five years of trying to get into showbusiness, including three rejections from the National Institute of Dramatic Art (NIDA).  The young actress came from Sydney to Melbourne to audition for a role in Young Ramsay, but was unsuccessful.  Her agent encouraged her to apply for the Cop Shop role, despite the fact that her only TV experience was in commercials.  “My biggest speaking part had been in a toothpaste commercial, telling a bloke he could do his own navigating next time.” 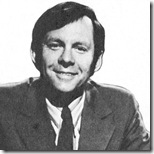 Love behind bars!
ABC stations in all states will be involved in a new public affairs program, Line-Up, to screen from December while the usual public affairs programs are on a break for summer.  The new program, to fill the timeslot normally occupied by Four Corners, will be hosted by former Nationwide and This Day Tonight reporter Paul Griffiths.  Executive producer for the program, Richard Watson, said the program will not be unlike the former magazine-style program, Saturday Week, but will have “more in-depth” content:  “It could be likened to a miniature Big Country.  The team will travel a great deal around Australia to make documentary films of varying durations within a flexible format.”  Another new series, Faces Of The Eighties, will be hosted by former Monday Conference compere Robert Moore (pictured), and will go to air on Wednesday nights in the timeslot normally occupied by Nationwide.  Faces Of The Eighties will feature interviews with Australians who are are leaders in their various fields, and who will continue to shape Australian society during the 1980s.  Overseas programs that will fill the Nationwide timeslot on Mondays include Collision Course, a documentary drama about a mid-air crash between two airliners over Yugoslavia in 1976, and Love Behind Bars, a look at a Texas prison where convicts of both sexes are allowed to mix.

Briefly…
Former Young Talent Time cast member Vikki Broughton is heading to Europe to star in a TV series for Italian network Telenova.  Broughton is currently in Sydney recording the soundtrack for the series of five half-hour specials, which will be filmed on location around Lake Como.

ABC’s rural affairs program Countrywide has won an award in the current affairs category at the recent Penguin awards in Melbourne.  Another ABC program, A Big Country, also won awards for Bob Connolly, for best producer and director, and Bob Plato for best script for a documentary or special report.

Former Number 96 star Joseph Furst’s guest appearance in The Young Doctors has so impressed the producers that they have decided to keep the character for future episodes.  Furst plays a mysterious German businessman, Heinrick Smeaton.

Viewpoint: Letters to the Editor:
”The way Countdown is cut off during the number one song is thoughtless.  This song has been chosen number one by the public and is the one the majority of people want to hear.” S. Milward, VIC.

“While watching QTQ9, Brisbane, I heard the newsreader say: ‘And how that famous Irishman, Mike Walsh.’  I always thought Mike was a true-blue Australian.” F. Bellman, QLD.

“Why does TCN9, Sydney, leave scenes out of the shows they screen?  To date I have noticed entire scenes missing from shows such as Love Boat and Starsky And Hutch.  This practice does tend to leave one somewhat confused, as the missing scenes are frequently referred to in what is left of the show.  Surely the channels should not have the right to indiscriminately cut scenes from their shows whenever they feel like it (apparently for the purpose of screening more commercials – which, according to the Australian Broadcasting Tribunal, should be limited to 11 minutes in any case).” N. Lewis, NSW.

“I agree with S. Pye (Viewpoint, 20 October 1979) about the program So You Want To Be A Centrefold.  A friend and I (both females) watched this program, as our boyfriends said they were both going to watch it.  We were both absolutely disgusted, as well as being embarrassed.  I felt these girls must be cheap to pose nude in front of a cameraman, then to be filmed for TV.  It is bad enough that they do this in magazines, let alone display their unclothed bodies on the screen.  Are there no morals left in this world?”  T. Yesberg, QLD.

What’s On (November 24-30):
HSV7 crosses live to Kooyong Tennis Stadium, Melbourne, for live coverage of the Satellite Circuit Tennis Finals, with commentators Peter Landy, Garry Wilkinson and Allan Stone.  The coverage airs from midday to 6.00pm on both Saturday and Sunday and starts Seven’s daily coverage of tennis action for much of the summer.  From Monday, Seven covers the Toyota Women’s Classic, live from Kooyong each day from 11.00am to 6.00pm.

Starting Monday night, and continuing through summer, GTV9 has a mid-evening news bulletin at 9.30pm in addition to the usual 6.30pm news.

On Tuesday and Wednesday, GTV9 crosses to the Sydney Cricket Ground for the Benson and Hedges World Series Cup, Australia versus West Indies.  Coverage starts at 2.20pm and, apart from a one-hour break at 6.00pm, continues through to 10.30pm. 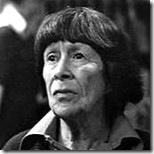 In Prisoner’s season finale (ATV0, Wednesday), Lizzie (Sheila Florance, pictured) is a bit under the weather, and Greg (Barry Quin) discovers a theft from the examination room.  Pat (Monica Maughan) finds herself in a predicament, while David (David Letch) makes plans for revenge.