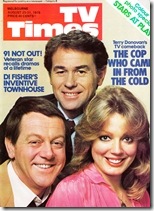 Detective Donovan gets back on the beat
Four years after leaving cop show Division 4, Terry Donovan makes his debut in Cop Shop, taking over the role of officer-in-charge of Riverside police station from George Mallaby.  But, as writer Marie Trevor adds, there are surprises in store for the team at Riverside: “When Terry’s cop arrives they won’t know what has hit them.” Since leaving Division 4, Donovan (pictured, centre, with co-stars Peter Adams and Lynda Stoner) has proved his versatility as an actor – having starred in three movies, including The Money Movers, eight stage productions and guest starred in a number of TV series.  He had a key role in the ABC mini-series Power Without Glory and joins Cop Shop having just finished up work on the movie Breaker Morant.

$4m budget for two series
Hanna-Barbera is working on two new multi-million dollar TV series aimed at the Australian and overseas market.  The two series, both of 13 one-hour episodes, will have a combined budget of $4 million.  Hal McElroy, director of TV development for H-B in Australia, said that production has gone ahead on both shows following strong interest by two networks.  One of the new series will be a contemporary drama, the other will be a period drama and production is set to start next year.  The international sales success of Australian dramas Prisoner and Against The Wind will mean that the two new shows will be aimed at the international market and one of the series could be a co-production with an English company. 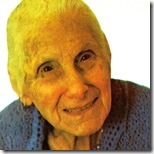 The drama of a lifetime
Enid Lorimer, 91 years of age and an actress for over 70 years, has some simple advice for aspiring young actresses if they offered roles only on the condition they be ‘nice’ to the producer: “When you’re told you won’t get the job unless you do, take it as an insult and refuse the job.  Many years ago I was offered a role by a producer who said ‘if you get the role, you will be nice to me, won’t you?’  So I hit him.  Oddly enough, I didn’t get the job.”  An English-born former Shakespearean actress who also worked at London’s legendary Old Vic theatre, Lorimer has appeared in many Australian TV productions, including Motel, Spyforce, Homicide, Division 4 and Cop Shop, and nominates TV and film work as her favourite: “because I love variety.  I nearly died of boredom in Passage From India during its West End run.  I hated going on stage doing the same thing night after night for a perishing year.  It’s such a joy for me to see the TV and film industries booming here today.  Years ago I’d have to tell young actors ‘you’ll have to go overseas if you want to get anywhere.’  Now there’s an industry here to support them.”  Lorimer (not her real name) admits she is a compulsive TV viewer:  “I love watching the performances of all the wonderful young Australian talent – although to me anyone under 70 is just a chicken.  The Young Doctors is bags of fun.  Cop Shop is the right balance between crime and the natural gaiety of the characters in their private lives.”

Five men at crisis point
The stories of five middle-aged men, worried about their future and each facing a life in crisis, are depicted in a series of ABC plays titled A Place In The World.   The first five self-contained plays will each depict one of the central characters.  The final play will see the culmination of all five characters’ dilemmas as their gather for a school reunion.  A Place In The World is written by Michael Cove and stars John Gregg (The Oracle), John Gaden, Nick Tate, Paul Mason and Kerry Francis as the main characters.

Theatrical producer Peter Williams is planning to make a TV soap opera, based on a setting ‘that’s never been exploited before’, for the 6-7pm timeslot.   The idea hasn’t been presented to any of the networks as yet.

John Ewart is returning to The Young Doctors in his role of Horrie Jamison, father of medical orderly Dennis (Chris King).

Viewpoint: Letters to the Editor
”Does ABC have a horse lover in its programming department?  How otherwise can anyone account for the network putting to air Ride On Stranger right after the excellent A Horseman Riding By?” G. Morris, NSW.

“John Michael Howson’s cruel, offensive and downright stupid remarks on The Mike Walsh Show about so many fine and accomplished actors and actresses, some who happen to be dead, are a disgrace.” E. Melville, NSW.

“I have recently read a book, The Plug-In Drug, by Marie Winn.  She believes that TV is an addictive, sedative drug which reduces children’s ability to think and talk.  A child’s mind, I have heard, is virtually inactive when watching TV.  It is also said to reduce a child’s perception and creativity.  Since reading the book I have found it difficult to give up TV, which seems to support the description ‘addictive.’  TV could be a marvellous educational aid if the viewing time of children was properly monitored.” E. Hutson, NSW. 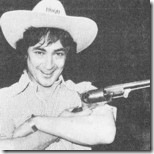 Vic Cameron (Terry Donovan), the new head of CI at Cop Shop (HSV7, Monday and Thursday), is not the efficient, disciplinarian everyone was expecting and the atmosphere is very tense, with Johnson (Peter Adams) caught in the middle, acting as a buffer to the others’ anger.

Country singer Reg Lindsay and British comedians The Two Ronnies, Ronnie Barker and Ronnie Corbett, are among the guests this week on The Don Lane Show (GTV9, Monday and Thursday).

ATV0 presents its annual telethon for the Deafness Foundation of Victoria.  Newsreader Bruce Mansfield introduces the telethon at 7.30pm Friday, with Annette Allison in the phone room.  The telethon continues overnight, with movies Road To Hong Kong, Help! and Keep On Rockin’ filling the hours between 2.00am and 8.00am Saturday morning.  The telethon continues through until midnight Saturday night.  The telephone number for donations is (03) 234 0011.

Sunday night movies: The Summer Of My German Soldier (HSV7), Living Free (GTV9), Night Chase (ATV0).  ABC presents A Man Of Ideas, the first play in the series A Place In The World, starring John Gregg.