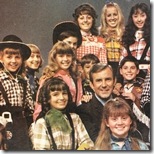 Melbourne’s The Age newspaper reported on Friday that the former child stars of the variety series Brian And The Juniors are gathering for a reunion in Melbourne next week – the first such reunion since the show wound up back in 1970.

The talent quest, one of the first variety programs on Melbourne television, began as Swallow’s Juniors on radio station 3DB in the early-1950s, hosted by the station’s breakfast announcer John Eden.

Brian Naylor took over hosting the program shortly before it moved to television, appearing on HSV7 from 1957.  This YouTube clip, taken from a Made In Melbourne special made by HSV to commemorate its 50th anniversary in 2006, includes Naylor’s recollection of the circumstances surrounding his appointment as the show’s host.  The clip also includes some early footage of the program and even some backstage ‘home movie’ footage taken by one of the cast member’s parents during rehearsals.

In 1964, Swallow’s Juniors changed its name to Brian And The Juniors and moved from Saturday to Sunday afternoons.  The program was later also relayed to stations across regional Victoria.  Over the program’s twelve year run on TV it is estimated that as many as 100 ‘Juniors’ appeared on the program, including later household names including Ernie Sigley and Patti Newton (nee McGrath).

Brian And The Juniors ended in 1970 when Naylor was promoted to the role of chief newsreader for HSV7.  However, the concept of a variety program featuring a junior cast was revisited when the 0-10 Network launched Young Talent Time in 1971 – a program that also featured some former Juniors cast members including Debbie Byrne, Jane Scali and Jamie Redfern. 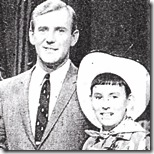 The reunion of the ‘Juniors’ will sadly not include the host Brian Naylor, who with his wife Moiree was killed in the Kinglake bushfires in February this year.  Tim McKew (pictured, with Naylor), a former Junior and these days a cabaret performer as a Noel Coward impersonator, told The Age: “(The reunion) had been organised before Brian’s sad demise.  He was a charming man, great with us children, never patronising.  We remember him very fondly.”

Permanent link to this article: https://televisionau.com/2009/06/remembering-the-juniors.html