Brisbane’s QTQ9 – only months away from celebrating its 50th anniversary – has made two announcements today about two of its long-timers.

The late-afternoon magazine program Extra is being wound up next week after a marathon 18 years on-air.  The program launched back in 1992 when the Nine Network launched ‘Extra’ programs in each capital city as the lead-in to National Nine News.  The Sydney Extra, Melbourne Extra and Adelaide Extra programs were all fairly short lived.  Perth Extra managed to hang on a few years longer, but Brisbane Extra – the name since shortened to just Extra – has continued in the 5.30pm timeslot despite the constant changing of Nine’s 5.30pm programming in the other capital cities.  The axe comes despite Extra maintaining a strong following in Brisbane and out-rating Seven’s Deal Or No Deal.  The final episode of Extra goes to air Friday 26 June on QTQ9.  Replacing Extra in the 5.30pm timeslot will be the quiz show Hot Seat which currently occupies that timeslot in the other capital cities. 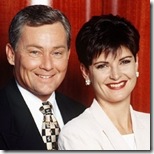 Meanwhile, QTQ9’s long-serving newsreader Bruce Paige has announced that he is quitting the Nine News desk, finishing up in the not-too-distant future.  Starting his career in the 1960s at Maryborough radio station 4MB, Paige then went to local TV station SEQ8 before joining ABC in 1971, staying for 14 years.  He then moved to QTQ9 in 1985 before going to TVQ10.  Following a newsreading stint at North Queensland-based QTV (now Southern Cross Ten) in the early ‘90s, Paige returned to Brisbane to QTQ9.

Bruce Paige’s resignation from QTQ9 comes only months after his former Nine News partner Heather Foord (pictured, with Paige) announced that she was leaving the news bulletin to move to the now-axed Extra program.

Permanent link to this article: https://televisionau.com/2009/06/bruce-paige-and-extra-to-go-from-nine.html