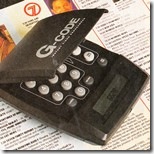 Since the advent of the home video cassette recorder it had been a running joke that it was a mammoth, if not perplexing, task for anyone – or at least, anyone over the age of puberty – to attempt to pre-program the VCR to tape programs in advance.  No two VCR models were the same and while many had no problems, there were just as many who either gave up in frustration or were constantly presented with programs that were not the ones they had hoped to record.  (Hands up anyone who has stumbled in setting “AM” instead of “PM” when setting the VCR, or had problems converting to 24-hour time?)

But a VCR revolution was coming to solve all our problems in the form of G-Codes.  An invention of the Gemstar Corporation, then publishers of America’s TV Guide magazine, the G-Code was a numerical code assigned to every listed television program which, when entered into a G-Code device, would instruct the VCR to record the program at its scheduled time.

The G-Code had been adopted in TV listings in the United States (where it was known as VCR Plus), Asia, Europe and New Zealand and, fifteen years ago this week, it made its debut in Australia. 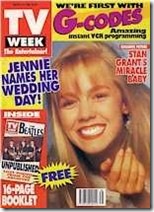 TV Week was the first Australian publication to promote the G-Code system and incorporate the numerical codes into their listings.  It was not the first time the magazine had tried to publish a VCR coding system.  Some years earlier the magazine had published barcodes that could be read by certain VCR remote controls to pre-program the recorder.  However, the number of programs that were featured with barcodes in the magazine were extremely limited and only a certain brand of VCR was compatible – whereas G-Code was in-built into a range of VCR models and even those that didn’t have the feature could use G-Code by purchasing a handheld unit (pictured, above) that would communicate the codes to the VCR.

So now the problem of programming the VCR was, according to G-Code, a thing of the past.  And while the G-Codes continue to be published in TV Week and virtually every other major TV listing in the country, the problem now appears to be our TV networks and their undying inability to be able to stick to what is published in the TV guides!

Permanent link to this article: https://televisionau.com/2009/03/hitting-the-g-code-spot.html