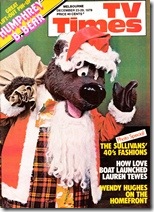 Barber’s still a big game hunter
Tony Barber has a reputation for stamina, and surviving.  Two years ago, the career of the former radio disc jockey and game show host was at an all-time low with the axing of Great Temptation and Name That Tune and the failure of his variety show for ATN7 Sydney.  To add to his woes, the Nine Network signed him up to host a revival of Great Temptation but it did not eventuate.  Barber then returned to his former home of Perth and there the energetic host bounced back with the national game show Family Feud being produced at TVW7, and now being seen on over 30 stations around Australia. 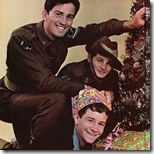 When Santa went to war!
Steven Tandy, Richard Morgan and Jamie Higgins (pictured), of The Sullivans, might be indulging in some off-screen Christmas cheer, but things weren’t so cheery in the show’s early-’40s setting where even Father Christmas was rationed and was banned from appearing in advertising.  Australians were instead encouraged to put their money to more patriotic causes such as war savings loans and bonds.  Sue Cram, researcher for The Sullivans, has been meticulously tracing back just what impact the war had on Australians at Christmas.  There were rations on various items including tea, beer, cigarettes, potatoes, chocolate and nuts, all normally popular items at Christmas.  Australia was also supplying the American forces with food and they got much of the ham that was produced.  On Christmas Eve 1942, the temperature hit 101 degrees Fahrenheit in Melbourne, where even ice was rationed.

Wooley cornered
Former This Day Tonight Hobart reporter Charles Wooley has joined ABC‘s Four Corners.  The 30-year-old has worked in newspapers and television in Western Australia and Tasmania and joined This Day Tonight in 1974.  Married with “two daughters, a dog and a cat” he sees the move to Four Corners as an advancement in his career. 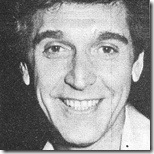 Shake-up for Lane show
A reshuffle in the production team for Nine‘s The Don Lane Show has had an impact on plans to take the show out on location in 1979.  Two of the show’s comedy writers, Mike McColl-Jones and Tim Evans, already may be missing from the show when it returns in the new year.  McColl-Jones has accepted a position at rival ATV0‘s Peter Couchman Tonight, and Evans is believed to be in negotiation with HSV7 for the role of producer on the Saturday night Penthouse Club.  Also missing from The Don Lane Show in the new year will be producer Lesley Shaw, to be replaced by producer and former journalist Vince Lovegrove.  And returning to the position of executive producer for the show will be Peter Faiman.

Briefly:
Cop Shop actress Jo-Anne Moore and former This Day Tonight host Sonia Humphrey have been cast for the ABC series Twenty Good Years.  Former The Box actress Helen Hemingway has also been signed up for the series which is currently in production.

Viewpoint: Letters to the Editor:
“I hope we aren’t going to be bored to death over the Christmas holidays when all the good shows have a break.  Blankety Blanks saved the day last year but now that’s been axed we will be left high and dry.” M. Allen, SA.

“Why do we have to have so many repeat programs, and in some cases, repeats of repeats!  There are many programs in Australia which are not screened here in Tasmania.  Is this because we can’t afford to have them here? The repeats go on, and even good comedians become stale after a while.” J. McRae, TAS.

“Why is it that any decent TV program or movie is programmed for viewing either in the middle of the day or night?  It makes me angry that a top class series like Poldark is screened at 11.00pm, or that the repeat of Upstairs Downstairs is shown at 2.00pm, when working people in 9-5 jobs simply cannot watch.” R. Ogilvie, QLD.

Sunday is Christmas Eve, and ABC devotes much of the evening to British Christmas specials.  HSV7 presents a movie, Father Knows Best Reunion, and GTV9‘s World Series Cricket continues until 10.30pm.  ATV0 continues a Melbourne tradition with Carols By Candlelight from 9.30pm, followed by Christmas Midnight Mass at 11.30pm.  And viewers are offered two versions of the Christmas classic Miracle On 34th Street, with the black-and-white 1947 version airing on HSV7 at 10.00pm, and the more-recent 1973 version on ATV0 earlier in the night at 8.00pm.

Christmas Day on Monday has movies and Christmas specials throughout the day on HSV7 and GTV9, while ATV0 has a late start to the day, commencing transmission at 3.00pm with a repeat of Carols By Candlelight followed by The Early Bird Christmas Day Show.  ABC‘s traditional Divine Service appears at 10.00am, then the test pattern takes over until mid-afternoon.  At 3.30pm, the cast of Play School, including Benita Collings, John Hamblin, Alister Smart, Don Spencer, John Waters and Noni Hazelhurst, present a special version of the Christmas story, told in Godspell-style with songs, improvisation and props.

ABC‘s 7.00pm news is cut to ten minutes for Christmas night, followed by the traditional Queen’s Christmas Message.  Like the previous night, ABC has more British fare with Christmas specials throughout the evening.  But over at GTV9, not even Family Feud and The Young Doctors get the night off for Christmas, both screening as usual.

Friday includes the first day’s play in the cricket Third Test, live from the Melbourne Cricket Ground, on ABC. 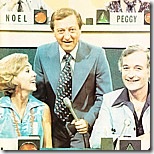 ATV0‘s weekday afternoon game show lineup, Blankety Blanks, Pyramid Challenge and Perfect Match, quietly comes to an end on Friday.  For Blankety Blanks (pictured) it is an inglorious end for a program that only a year earlier was a prime-time ratings giant before being moved by ATV0 to a midday timeslot earlier in the year following reports of a falling out between the station and the show’s host Graham Kennedy.