Reports today that Nine’s long-running quiz show Temptation is well and truly finished with the show’s host Ed Phillips not having his contract renewed by the network. 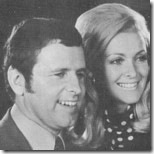 Beginning in 2005, Temptation was a rework of the long-running Sale Of The Century which ran from 1980 to 2001.  Sale, of course, was itself a rework of the 1970s Great Temptation that ran on the Seven Network from 1970 to 1975 with Tony Barber and Barbie Rogers (pictured).

Towards the end of 2007, Temptation‘s future appeared to be in doubt when Nine cut it back to four nights a week to accommodate a revival of Who Wants To Be A Millionaire on Monday nights.  Temptation was then ‘rested’ in favour of the US sitcom Two And A Half Men which has given Nine strong ratings in the 7.00pm timeslot. 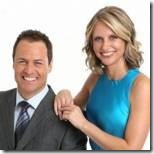 Nine did eventually put Temptation back into production earlier this year but the batch of episodes were never put to air, instead the network continued to push the Two And A Half Men bandwagon.  With the non-ratings season starting this weekend, Nine has decided to begin to air those remaining Temptation episodes.

A summer showing of Temptation could have given Nine an indication of whether the format is worth continuing into 2009, but instead they’ve decided to let the show fade out and bid farewell to Phillips.  Viewers will be reluctant to give the show any support over summer now, knowing that it won’t be back in the longer term.

Temptation co-host Livinia Nixon appears to be staying on board at Nine as weather presenter on Melbourne’s Nine News.

Curiously, Phillips has been let go from Nine just as other news comes out that the network is piloting a new 5.30pm show to lead-in to Nine News, with no presenter formally appointed.  Network identities Karl Stefanovic (Today) and Leila McKinnon will host the pilot of the new show but the network has said that if the show is given the green light then new hosts would be appointed.