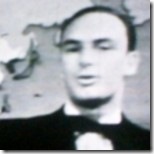 16 September 1956, fifty-two years ago, and Bruce Gyngell greets Sydney on a night that made history: Television was now here, finally.

Australians had to wait twenty years for TV to finally come to fruition after numerous experimental broadcasts and demonstrations, a number of royal commissions and lots of politics.

But when we watch that historic opening introduction on TV now, the truth is it was a fake. TCN9 Sydney essentially re-wrote history when it realised that the only footage kept of its opening night had disappeared. The introduction that we see these days, featuring Gyngell standing in front of a world map (as pictured), was recorded a year after the actual event – hence it probably looked a bit more ‘sophisticated’ and rehearsed than what really went to air on 16 September 1956, when Gyngell was crammed into a space no larger than a wardrobe, and had to stand on an angle to line up with the camera standing on a crooked floor. The makeshift studios which housed much of TCN9’s early productions were in a church hall in the suburb of Surry Hills, as construction of TCN9’s studios in Willoughby had not quite kept to schedule, and it was very important for Sir Frank Packer that his TV channel was the first to air ahead of his newspaper rivals, Fairfax, who were forming Sydney’s second commercial TV station, ATN7.

And despite receiving the credit for being the first person on Australian TV, Gyngell might have been the first face seen on TV screens that evening but he was not the first voice. That honour went to studio announcer John Godson who introduced TCN9’s first night of regular transmissions with a very formal spiel:

“This is television station TCN Channel 9, owned and operated by Television Corporation, 168 Castlereagh Street, Sydney. Transmitting on 195 to 202 megacycles per second from Artarmon Road, Willoughby, with an effective radiated power of 100,000 watts, vision, and 20,000 watts, sound.”

TCN9 was Sydney’s, and Australia’s, only TV station for almost two months as Melbourne’s HSV7 and ABC‘s first TV stations, ABN2 Sydney and ABV2 Melbourne, were not officially opened until November of that year.

Permanent link to this article: https://televisionau.com/2008/09/good-evening-and-welcome-to-television.html