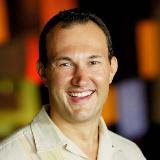 Television and radio presenter Clinton Grybas has died today. He was 32. A well-regarded sporting commentator, Grybas started in radio as a sports commentator for ABC radio in the mid-1990s – covering sports such as NBL, AFL and the 2000 Sydney Olympics.He later moved to commercial radio, as a member of Melbourne 3AW‘s sporting line-up, …

END_OF_DOCUMENT_TOKEN_TO_BE_REPLACED

Permanent link to this article: https://televisionau.com/2008/01/clinton-grybas.html