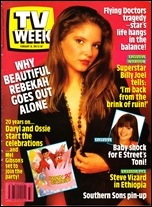 Private property! Home And Away star Rebekah Elmaloglou (pictured) is determined to keep her professional and personal lives separate.  Unlike many fellow soap stars, Elmaloglou has refused to talk publicly about her boyfriend of twelve months and the pair have never been photographed together.  “It’s just one of those things I don’t find important to …