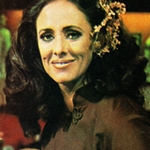 Maggi Eckardt, one of Australia’s first international models and a former daytime television presenter, has died at the age of 82. Eckardt began modelling in Sydney and was soon “discovered” by the Queen’s dressmaker, Norman Hartnell, visiting Australia on the hunt for models. In the 1960s, she became one of the world’s most sought-after photographic …

END_OF_DOCUMENT_TOKEN_TO_BE_REPLACED

Permanent link to this article: https://televisionau.com/2020/05/obituary-maggi-eckardt.html