Mark Holden bailed out of his university studies in the 1970s to become a pop star and soapie star – collecting three TV Week Logie awards on the way, including Best New Talent in 1977.  Then he was a 1980s songwriter and record producer – with a brief TV hosting gig on the ill-fated The …

END_OF_DOCUMENT_TOKEN_TO_BE_REPLACED

Permanent link to this article: https://televisionau.com/2010/04/mark-holden-on-talking-heads.html 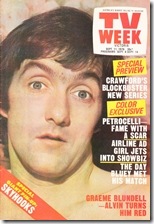 In over 30 years in showbusiness, Graeme Blundell has authored books (including biographies of Graham Kennedy and artist Brett Whiteley) and worked on both sides of the camera and the stage – and despite appearing in countless television and film productions, he is most likely to be best remembered for his role as the ‘70s …