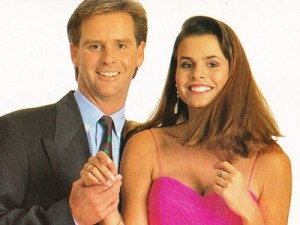 The Nine Network’s long-running quiz show Sale Of The Century was dropped a bombshell early in 1991 when hosts Tony Barber and Alyce Platt both decided to leave the program. Barber had hosted the program since its inception in 1980, and Platt had been with the show since 1986. Producers took a gamble when it chose to replace Barber with Glenn Ridge, a TV host whose only prior on-air experience was in regional television. Joining Ridge on the new-look Sale Of The Century was Jo Bailey who had recently joined the show as a model but had no idea she was being considered for the co-host role. And the new-look Sale was given a warm welcome by Seven Network rival Derryn Hinch: “We’ll kick its teeth in.” Picture: TV Week, 13 April 1991

Permanent link to this article: https://televisionau.com/flashbacks/saleofthecentury_1991