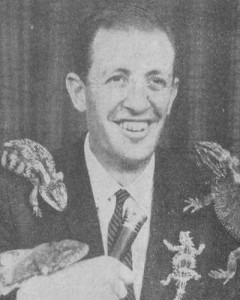 In 2006 Today Tonight host Naomi Robson created headlines for her wearing a lizard when paying tribute to Crocodile Hunter Steve Irwin after his tragic death. Back in 1960, ABC host Michael Charlton managed the same feat, though under far less controversial circumstances, when a batch of lizards from the Australian Reptile Park were brought into the studio for an appearance on Animal Life. Picture: TV Times, 19 May 1960

Permanent link to this article: https://televisionau.com/flashbacks/mcharltonlizard