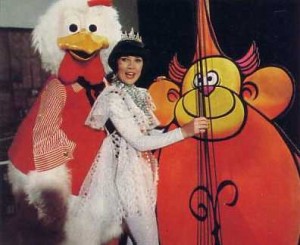 Jacki MacDonald was a popular personality in her home state of Queensland in the 1970s, and later nationally when she joined the team on Nine’s Hey Hey It’s Saturday in 1979. In 1980, as well as appearing on her own breakfast show on TVQ0 Brisbane and on Hey Hey It’s Saturday, Jacki took on the role of Princess Of Circusworld in the pantomime Jacki And The Space Invaders at Brisbane’s Her Majesty’s Theatre. Picture: TV Week, 16 August 1980

Permanent link to this article: https://televisionau.com/flashbacks/jackimac