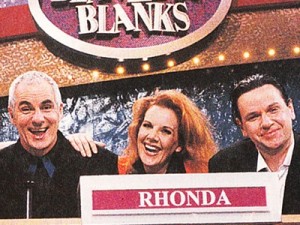 Shane Bourne is known for his recent role in the police drama City Homicide and as host of Thank God You’re Here, but over a decade ago the comedian and former Hey Hey It’s Saturday regular was host of the Nine Network’s 1996 remake of the 1970s game show Blankety Blanks. It was the second time the Nine Network had attempted to remake the show that Graham Kennedy made famous in Australia in 1977-78. The first was in 1985 hosted by Daryl Somers. Pictured, left to right, is Shane Bourne and two of the show’s panelists, Rhonda Burchmore and Marty Fields. Picture: TV Week, 30 November 1996

Permanent link to this article: https://televisionau.com/flashbacks/blanketyblanks_96