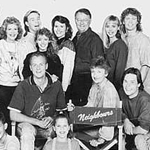 As Neighbours approaches its 35th anniversary on British television, BBC Radio 2 earlier this week hosted a three-hour tribute to the soap that at its peak was watched by over 20 million British viewers. The Brits were familiar with Aussie soaps, with earlier titles like The Young Doctors, The Sullivans, Sons And Daughters, A Country …

END_OF_DOCUMENT_TOKEN_TO_BE_REPLACED

Permanent link to this article: https://televisionau.com/2021/09/bbc-celebrates-neighbours-milestone.html