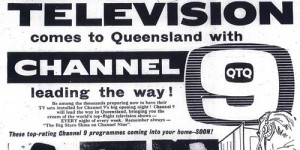 Although Brisbane was the site of some of Australia’s earliest experimental television transmissions in the 1930s, television in Australia was officially launched in 1956 in the two largest cities, Sydney and Melbourne. In September 1957, the Postmaster-General announced plans for the second stage in the introduction of television in Australia — covering Brisbane, Adelaide, Perth …